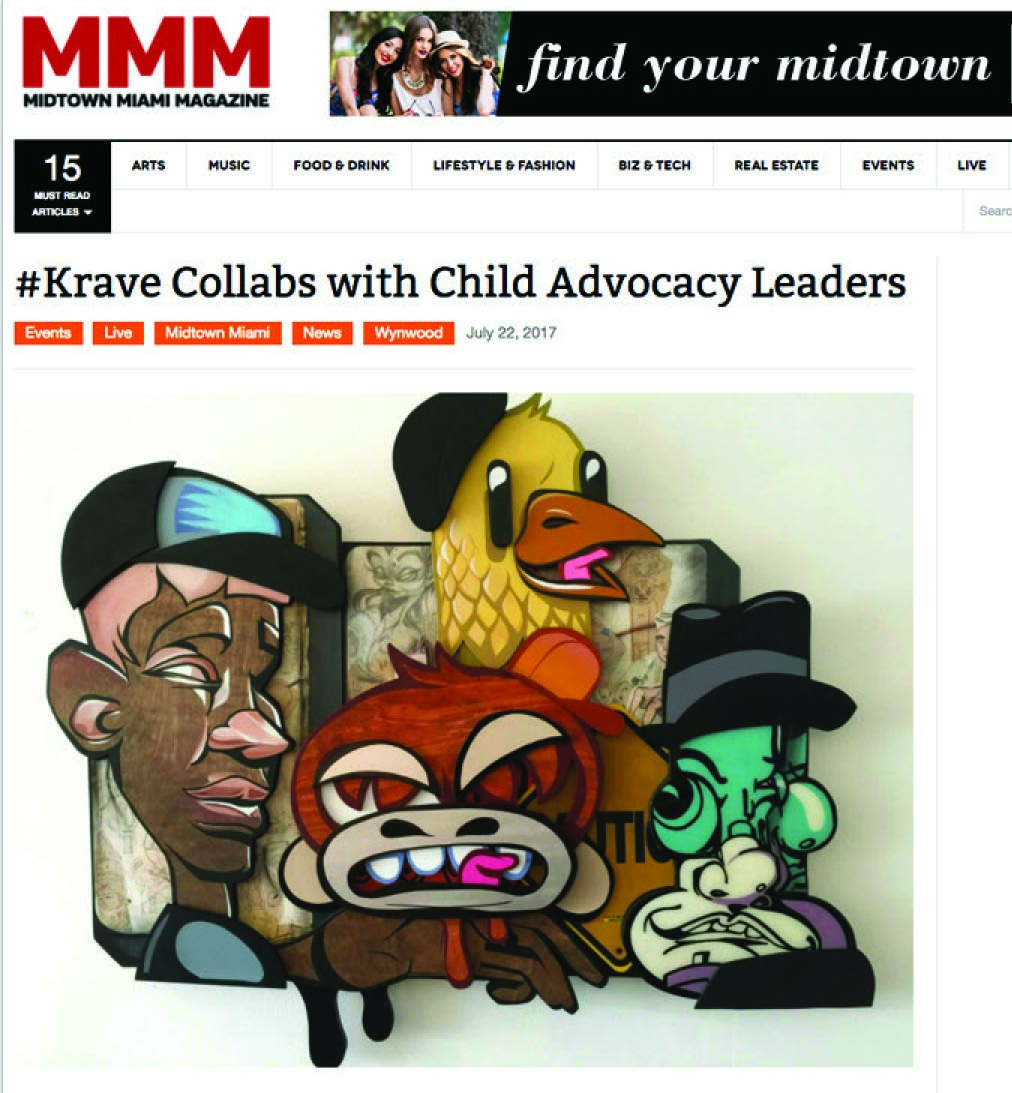 High and low, sweet and bitter, complex and minimalâ€¦ the most intriguing (and successful) pairings often contraststrongly.With that in mind, The Childrenâ€™s Trust has partnered with Miami-based artist Daniel â€œKraveâ€ Fila for the 12th Annual Champions for Children event, also known as the â€œOscars of Child Advocacy.â€Krave is best known for his large-scale street art, as well as his character, â€œEl Mono Frescoâ€ (The Fresh Monkey). His piece, â€œErin,â€ in the Design District, is perhaps his most notable. It was erased by an anonymous citizen and later replaced, albeit in a different pose. More recently, Krave was commissioned to create works for theRitz-Carlton Palm Beach, MTV, Greyhound, and SLS Hotel Miami Beach. For The Childrenâ€™s Trust, his work will honor the spirit of the Champions for Children event, with a lively diptych inspired by life in Miami (pictured). It will be auctioned to benefit the Trust at the event.â€œThere is no greater cause than the wellbeing of our children, and I am honored to contribute to it,â€ added Fila.The Childrenâ€™s Trustâ€™s â€œChampions for Childrenâ€ event honors individuals and programs that have achieved greatness in their service to children and families. This yearâ€™s honorees are: Congresswoman Frederica Wilson with the David Lawrence Jr. Champion for Children Award; Florida State Senator RenÃ© GarcÃ­awith the Excellence in Public Policy Award; Andrea Fletcher from Children of Inmates with the Excellence in Direct Service Award; and the Program of the Year Award to Ailey Camp Miami, United Community Options of South Florida (formerly United Cerebral Palsy of Miami), and the A.B.F. Learning Center.â€œRecognizing the valuable contributions of talented, passionate advocates for children and families is an important part of our work at The Childrenâ€™s Trust,â€ added James R. Haj, president and CEO of The Childrenâ€™s Trust. â€œWe must celebrate â€“ and highlight â€“ people and organizations who weather restrictive budgets and a changing climate for nonprofits, never giving up on their promise to our community.â€Sponsors for the event include City National Bank and TD Bank as Gold Sponsors; Citrus Health Network, FIU Center for Children and Families, Florida Blue, United-Way Miami-Dade, and WOW Factor Marketing Group as Silver Sponsors; and the Wels Foundation and UHealth as Bronze Sponsors.This yearâ€™s Champions for Children will be held at the Treetop Ballroom at Jungle Island on Friday, August 25, 2017 from noon to 1:30 p.m. Bios of each award recipient are available upon request.